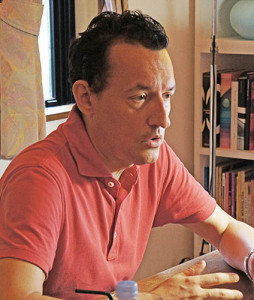 Born 1967, in Turin. In 1986, Tullio attended IAAD(Institue of Applied Arts and Design). While he was still in school, he was employed to Giugiaro’s Italdesgin. He worked in Italdesign for 6 years and had worked on various projects. In September 1995, Tullio joined Design Club International where Noriyoshi Kurihara was the vice president. After that,Tullio went back to Italdesign as a senior designer. Tullio has worked with FIAT, JAC, Bertone, I.D.E.A. Institute and also in Stile Bertone S.p.A. as a design coordinator. Now Tullio is an independent free-lance designer who is busy flying over the world.

Since a student IAAD, I had admired Giugiaro’s sketches. So, when Italdesign offered me a job, even as a student, I started my career there. That was the reason I took the job in Italdesign. I guess i was offered the job because I was always the Top student in my school. My life back than was, work at Italdesign till 5pm, than go to school from 7pm to 11pm. It was my dream to work in Italdesign, so I don’t think it was hard but it was a fulfilling life back then. 5 years in Italdesign had taught me a lot…Learn more