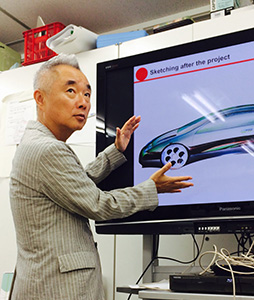 Born 1949, in Fukuoka, Japan. After graduated from Hakata Technical School in 1968, he joined Nissan automobile as a designer. He started off with designing parts, then begin to work on Second generation:Nissan Violet, and had worked on many projects since then. As his most famous design is Nissan 300ZX, he also worked on Silvia240SX, SkylineGT-R, InfinityG35, Q45 and so on. In 2008, he became a professor in Tokyo Metropolitan University, and has taught many students about the beauty of car design through the class call [transportation design].

“Why did they hire Yamashita?”, “Who hired Yamashita?”, questions were being brought up as time goes by. In order to prove them wrong, I always practice my sketch after work back at the company’s dormitory. Even if the chances of being able to design things other than small parts is uncertain, but the one thing I know is, if I couldn’t be better, there will be not chance for me at all. I was force to the corner, feeling pretty desperate.”This is not where you draw the tire,” Half amazed, my senior who lives in the same room will give me advise whenever I showed him my sketch. But it was still so hard. Even though I was told to draw the tire slightly to the right, I still can’t properly draw the balance between tires whenever I started a new sketch.Apart from being pointed out on the same mistake, I will draw the same thing over and over again too….Learn more

The Most Common Mistakes That Students Make in Their Car Sketches – 4. Drawing Tires and Ellipse Drawing

Q: I cannot draw lines at an intended position. How can I improve it?