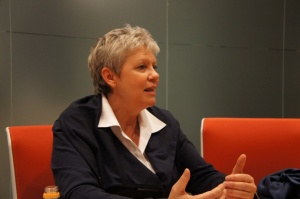 “If designers are the auto industry’s rock stars, Asensio is its Britney Spears. She made her reputation at Renault by creating one of the very first “lifestyle” vehicles. Called the Scenic, it combined the driving characteristics of a conventional sedan with the packaging of a smart-looking minivan. (Fortune Magazine featured Anne in an article entitled “25 Rising Stars”in 2001, which highlighted next-generation global leaders.) ”

During the week of Tokyo Motor Show, we had a chance to interview Ms. Anne Asensio.

For those who do not Anne, let me briefly explain who she is. She started her career as a car designer in Renault from 1987 to 2000. And then she was headhunted by GM to become an executive design directors until 2007. Since 2007 she has been working as a Design Experience Executive in Dassault Systems. There are not many woman car designers in the industry. This is a kind of rare occasion to interview an woman designer, especially at this high hierarchy level. Learn more