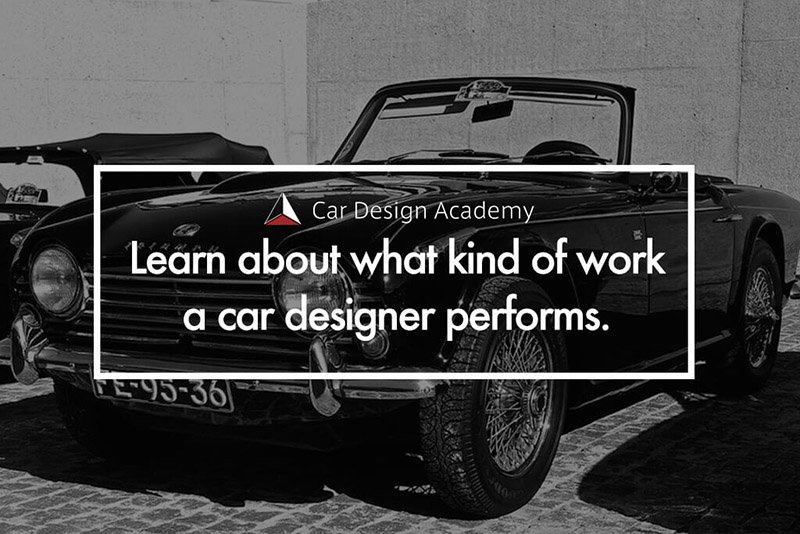 Hi! This is Car Design Academy.

The task of the designer is usually divided by some aspects.

・Exterior Designer’s job is design the appearance and style of the car.

・Interior Designers focus on making the vehicle interior for the driver and passengers, and also design the shape of instrument panel.

・Color/trim Designers’ job is color coordination of both exterior and interior, and also they decide what materials (metal, wood grain, leather, fabric, carpeting) are to be used on the inside and outside of the vehicle to make it visually appealing.

“Clay modelers” transform a concept sketch drawn by a car designer into a three-dimensional object by using industrial clay.

For example, target setting. Designers do research like “what kind of people are most likely to buy their products, and/or when do consumers make purchase decisions.”

Marketing research such as observing and collecting data from customers’ perspectives is also an important job for car designers.

“Exterior Deisgners;” a job designing body and other exterior parts of the vehicle. 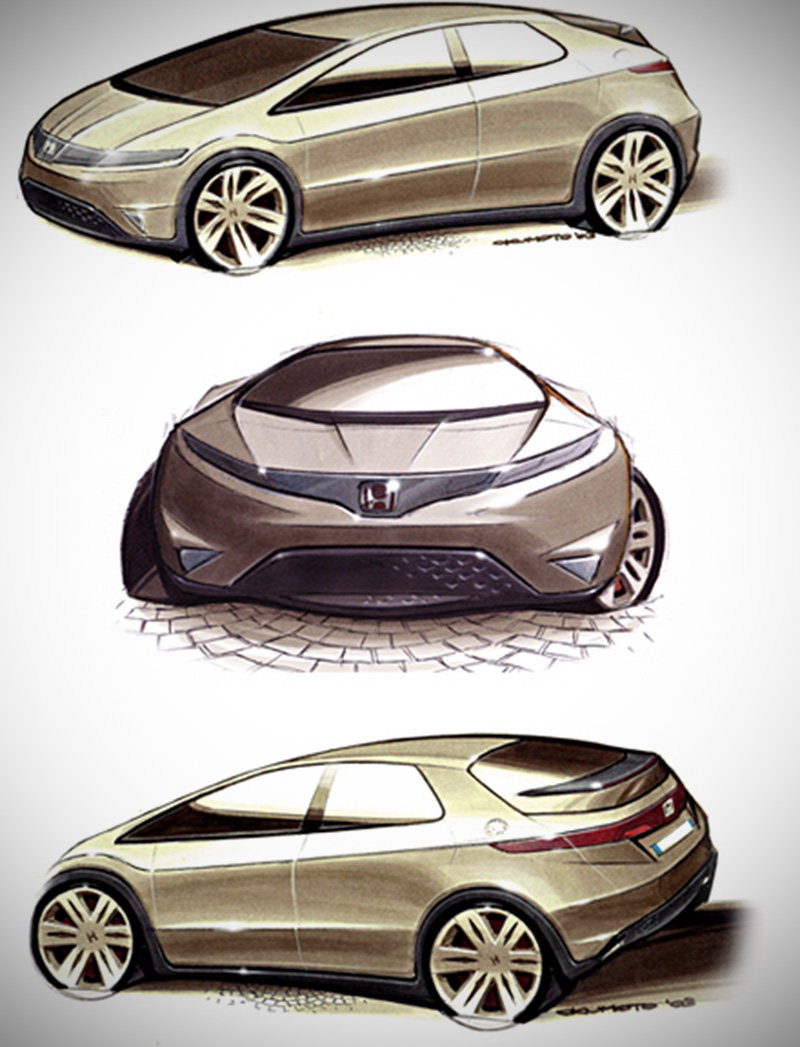 This is an original sketch for Honda Civic Type R Euro.

The car was chosen as “The No.1 Hot Hatch” by European magazine.

Not only for its driving performance, the car has been awarded “high acclaim” for its exterior design.

At the outset of project, the exterior design team was set a mission from their management. That was “Break customers’ image they have had for Honda.”  “The Civic Type R is the first European-market for Honda. Honda had a strong desire to prove that Japanese car can be accepted in the European market.” Honda was another major focus for the team, “creating a new design which makes all other car designs look obsolete.”

To accomplish these missions, the team cleared inside evaluations, and the project seemed going well; however the thing was happen when the design was ready to take shape.

Matsumoto who was a LPL (Large Project Leader=responsible person for the Civic development) put a stop. He asked, “Let me try once more, I am not satisfied yet.”He said, “This design is good, but for playing this design a more active role in Europe, something is missing.”However, we did not have enough time to do over again.

Then, Mr. Okumoto who was a Design PL for the base model team assigned to go to Italy. A mandate was given to Okumoto, “Do not come back to Japan until you can make an outstanding design.” In the beginning, he did not take a pen to start design immediately when he arrived in Italy, a land of art and culture. Instead of designing, he visited all around Italy, and tried to get the feel of European culture with his skin.

Can you guess what he found from that?

・He remembered how beautiful Japanese Kimono was. The Kimono is a Japanese traditional garment which is T-shaped, straight-lined robe worn. The pattern for a Kimono is very simple, because every piece starts out as a rectangle. He found beautiful creased lines among them.

・He also found that Kimono gracefully expresses the surface curves which creates charm of elegant and sleek silhouette.

Those sensitiveness which is often shown in “Japanimation” is considered as the one of the characteristics in Japan. The above sketch was drawn which is reflecting his discovery of Japan-ness.

“Normally, the management insists to keep costs and seek higher profitability for developing a car. In this case, everyone in the company shared the same objective, “”delivering new design to the world and then to raise Honda’s image up in European market.””
That is how Honda Civic Type R Euro was given a birth.”

By the way, let me explain to you what were peculiar differences.

For example, they adopted original design for door handle and fuel filter port in order to emphasize the unique character, even though additional cost was unavoidable. The other originality was to implement the thin and linear headlamp and rear combination lamp design for feature to express sharpness of Japanese sword, Katana. The designers consciously designed the body surface appearance to reflect Kimono folding straight lines and twisted curve line. Especially, you can see the characterline looks well-creasing kimono. Japanese traditional beauty such as kimono is quite different from Western ideals of beauty; however each of them has unique factors respectively.

Okumoto realized that and put into their design.

They also show us that those sensitive expression is the unique characteristic of Japanese arts. 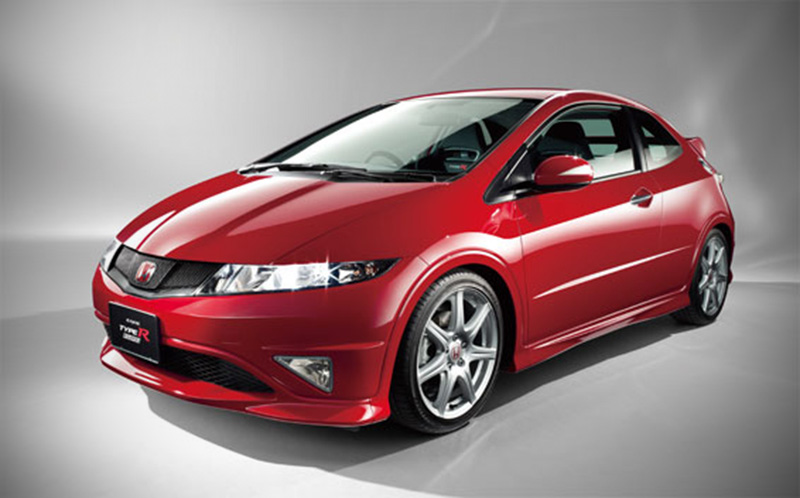 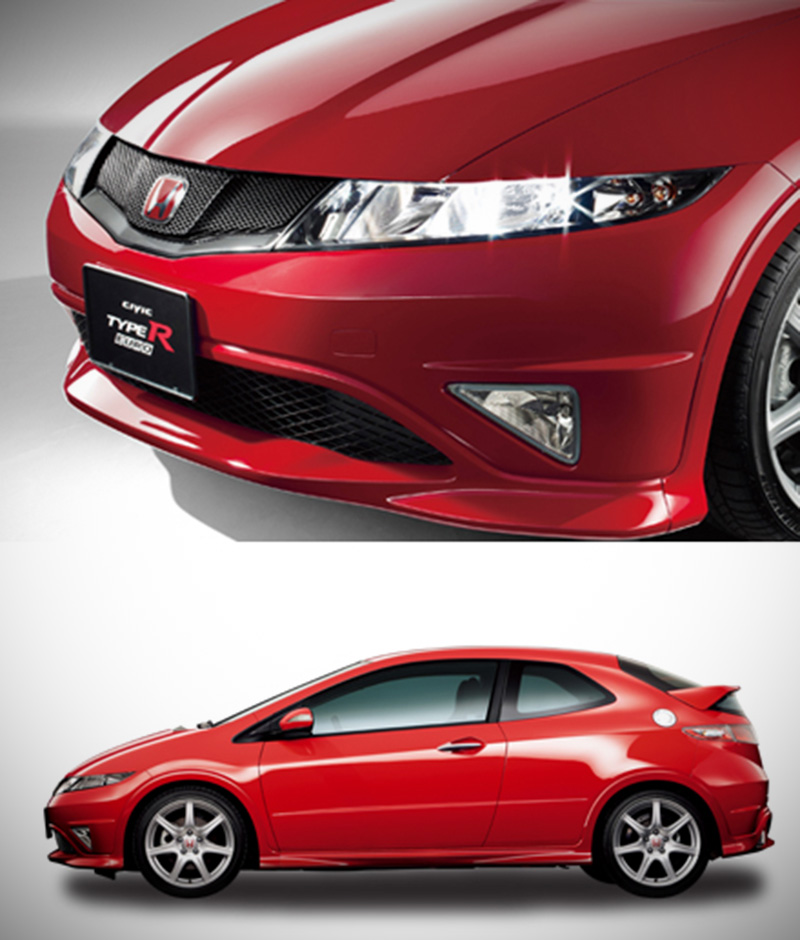 Can you get some images about what is the job of exterior desginer?

You need to figure out “what does people want?”

In other words, a designer’s work is to convert consumers’ wish into a shape.

What is so-called good design is probably consolidating those elements successfully into a visible shape.